The Truth About Online Business

What you're about to read is a glimpse into the real world of online business. It isn't a sales pitch, it's not a bunch of theory-based crap that I've read, it's me writing straight from the heart and reflecting on my experiences to explain the truth.  Enjoy! I thought this to myself as I scrolled through his income reports, one after another.

My mouth literally hung open in disbelief as I read over his content.

Not only was he telling me about the money he made, but he was explaining HOW he made it.

One income report after another, my heart began to race.

I can do this, I've spent the last 7 years as an internet marketer and I teach this stuff at the college level.

...I'm gonna beat this dude at his own game.

This is what I was thinking as I was sitting in a cubicle at work getting angry/motivated at the same time.

That's the amount of time every weekday I was stuck hunched over my computer like a prisoner.

Truth is, my job wasn't terrible.

But I was SO TIRED of taking orders from other people.

I wanted to build something of my own.

Something I could be really proud of.

But most of all, I wanted to work from home without having to sit through rush hour traffic every day.

Seriously, I lived in Chicago and was driving to the burbs for my job every day.

Each trip was a minimum of one hour.

My commute was the bane of my existence. 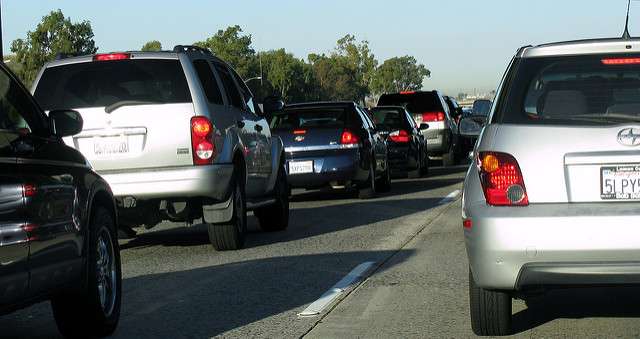 A brilliant depiction of my most hated thing on earth.

Then I entered what I call the “learning” phase.

Everyone should have the "learning phase". Just make sure you don't get stuck in here. Action is the only thing that makes online businesses real.

Blog after blog, I read about different online businesses.

I would read some blogs at work and some when I got home.

After a few days, it dawned on me.

This online business stuff isn’t a scam….people actually work from home and earn a living.

Then, I discovered podcasts….

Turns out that my soul-sucking commute was good for something.

While at the gym.

I started brainstorming ideas only to talk myself out of them.

The excuses you use to talk yourself out of starting your business are just limitations.  You can start as soon as you're ready to make the sacrifices required.

The excuses were endless.

“Nah, that idea has already been done before.”

“Everyone else is fine with working for someone full-time, I just need to shut up and work.”

Then one day I walked into my bosses office for our weekly meeting and it wasn’t pretty…..